I am an absolute sucker for food related TV shows. We actually got cable again for the first time in years just so I could watch The Food Network. It turns out though, both YouTube and Netflix have much higher quality food content than cable. A prime example is The Chef Show with Roy Choi and Jon Favreau.

When I watched the episode "Extra Helpings with Babish and Dave," I knew that I wanted to take the plunge and make French Onion Soup from scratch. Chef Choi said that's French Onion Soup is "the easiest recipe that actually requires technique" so I thought it would be the perfect recipe to share here. On the show, he doesn't give measurements - but it gave me a great base to put together a written recipe for you guys!

Full disclosure: the image above is a stock photo until I have time to reshoot this recipe. The image on the recipe card is my own - and I guarantee it's still delicious!

If we're following this recipe to a T - there's a few layers of ingredients. It can be amped up or toned down based on your budget, time available, and desire to experiment. Basically, this soup just needs tons of onions. The traditional soup is made with onions, a hearty beef broth, liquor and cheesy toast. In a pinch, you can use chicken or vegetable broth, Chef Choi says you can even use water, but nothing will beat out a homemade beef stock. Here are some tips and tricks on what you can and can't put into stock.

For the cheesy toast, the sky truly is the limit. Ideally, you want a really nice and crusty sourdough bread, again, and as always, homemade is best. For this recipe, I didn't use homemade but I got a nice loaf of sourdough made in house at our local supermarket.

For cheeses, Roy suggests using Provolone, Emmental, Gruyere and Parmesan. I did get all of these, but I had to sub out Emmental for Swiss as none of my local supermarkets had it. Stuff like this happens - don't sweat it. However, do sweat it if you use bottled Parmesan. Ideally you want to grate it yourself. Parmesan Reggiano is my go to.

This is not a budget food, nor is it diet food. Don't think because the bulk of this dish is onions and broth that it's going to help the fat melt off your body. This is 100% comfort food. It's going to stick to your ribs and feel like the perfect meal for fall or winter.

How Do You Make Roy Choi's French Onion Soup?

Although this dish does require a lot of time, other than cutting onions and being patient, it doesn't require much in terms of technical skills.

After cutting all of the onions (about 5-7 of them) you just need to slowly - and I mean slowly - reduce them to what Chef Choi calls an onion jam. This recipe goes beyond caramelization for a rich and deep umami onion flavour. On The Chef Show, it looks like it only takes about 20 minutes to get the onions to where they should be, but on low-medium to medium heat, it took me about an hour and a half just to brown the onions to where they had to be.

While I was simmering down the onions, I actually took time to write out this recipe as well as make my first Instagram Reel! I never got into the whole TikTok trend, so I feel like I'm just playing catch up with reels. It was kind of cool and turned out interesting - my reel of French Onion Soup here.

In The Chef Show, Roy mentions many people purposefully shortcut their caramelization with additives. What happens if you accidentally under caramelize your onions? In the ingredients list, I've added 2 "optional" ingredients if you find your broth wasn't rich enough, or your onions didn't caramelize long enough. They're either (or both of) tomato paste and Worcestershire sauce. If you need an umami boost, adding either or both of those ingredients will hack your soup if you were impatient or overestimated the quality of your broth.

Ideally, though, you left everything for the perfect amount of time and it came out flawlessly all by itself. 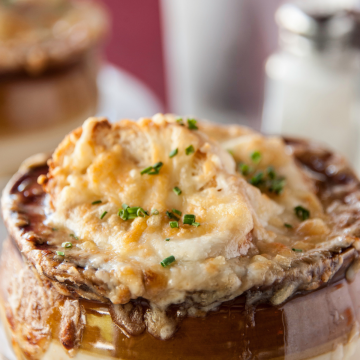