My partner is an avid hobby fisher and loves the outdoors. Because of his interest in outdoors, and my interest in cooking, we often watch outdoor cooking videos. One of our favourite channels, Firebox Stove, often serves up fish on dehydrated hash browns shreds and my partner always talks about how good it looks.

This week I was home sick and he was headed out on a camping trip on the weekend, so I decided to make use of all the potatoes we have to put out a dehydrated hash browns recipe.

What Do You Need to Make Dehydrated Hash Browns?

Honestly? Just potatoes. I really do recommend having citric acid to give a more stabilized product that is less likely to brown but isn't 100% mandatory. Obviously, having a dehydrator helps, but you can do this in your oven if it'll heat as low as 125F/52C.

Other than that, if you want to make potato shreds and not potato "chips", I recommend a food processor. You can use a cheese grater, but since discovering the shred function on my food processor, I never ever use my cheese grater unless I have to.

For recommended appliances, I am 100% an Excalibur person. My dehydrator is a 5 tray Excalibur dehydrator that I got at Costco on sale. You can find it here (US) (Canada). I can't find the 5 tray one anywhere and suspect it was so cheap because it was being discontinued. I kind of wish I had the larger storage one, anyway, so I've linked the 9 tray in the same model I use. I had previously had one I purchased on Amazon from Hamilton Beach and it was made really cheaply and we ended up returning it after a single use.

For a food processor, I did cheap out and it's been going strong for the last 2 years without any problems. I bought a relatively cheap (around $100) food processor from Hamilton Beach (US) (Canada). It's actually only $49 USD so if you're in the states I'd snatch that up immediately. I use the shred blades at least twice a week.

First and foremost, you need to cut or shred your potatoes into their desired size/shape. Personally, I liked shreds because they can overlap a bit and give you more bang for your buck in terms of space. It also cooks and dehydrates faster. If you decided on slices, however, you can make a really good scalloped potato dish with them.

The first time I made these potatoes, I made the mistake of putting in WAY too much citric acid. They dehydrated fine, but the flavour was concentrated and made the potatoes taste like pennies. Not a great try. So don't make that mistake. I'd say scale the citric acid to about ¼ teaspoon per 10 medium potatoes and 10 cups of soaking water.

Next, you're going to blanch the potatoes until they're semi-translucent and fork tender. This should be about 4-6 minutes with water at a rolling boil. Once the potatoes are fork tender, place them in a fine mesh sieve and run under cold water until you can handle them comfortably. Drain as much water as possible over a bowl, and bring them to the dehydrator.

For the actual dehydration process, you're going to want to place them evenly spread over the trays. It's okay for shredded potatoes to overlap a bit, but any other shape they shouldn't have any overlap.

Set your dehydrator to 125 degrees Fahrenheit and set a timer for 6 hours. The hash browns may take as long as 8-10 hours depending on your individual climate and how dry they were before you put them in. You want them to be crisp and translucent and have no sign of dampness.

I stored all my hash browns in mason jars and I used 12 medium-small potatoes (unpeeled) and it yielded 4 250ml mason jars full of dehydrated hash browns.

How to Cook with Dehydrated Hash Browns

In order to rehydrate dehydrated hash browns, you need to soak them in water for about 15 minutes. After they're rehydrated, you just need to cook them like you would any other fresh shredded potato. I love them in some kind of fat (bacon grease is my favourite, but a combination of butter and canola oil works, too).

Season them with salt, pepper, garlic powder, onion powder and paprika. Serve them with your favourite breakfast foods or bring them camping to serve with fish or any other protein you bring out on the road with you. 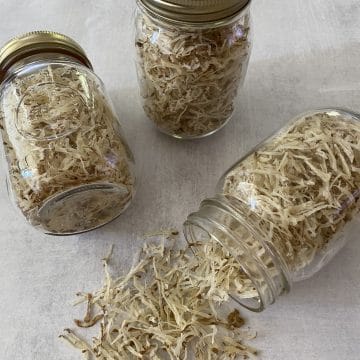 Prevent your screen from going dark
A quick and easy recipe for dehydrated hash browns to bring camping or keep for an emergency. Dehydrating allows you to avoid food waste from your garden, or prepare for a shortage of food in uncertain times. They're also amazing to save space when camping or going on an outdoor trip.
4.5 from 4 votes
Print Rate
Course: Side Dish
Cuisine: American
Prep Time: 15 minutes
Cook Time: 10 minutes
Dehydrating Time: 8 hours
Total Time: 8 hours 25 minutes
Servings: 20 servings
Calories: 82kcal
Author: Lauren

« Vietnamese Egg Roll Bowl with Nuoc Cham
What Can I Use for Broth and Stocks? A Comprehensive List (60+ Items) »