When my aunt had her wedding, we had a week together in Quebec at her in-laws cottage and has a potluck style weekend filled with delicious food and lots of drinks. One of the dishes was pulled pork cooked in a slow cooker brought to the evening by my aunt's brother-in-law. I don't really like most pork dishes at 23, and certainly did not like them as a picky teenager.

I was skeptical, but I tried this pulled pork recipe and became absolutely addicted. I'm not exaggerating when I say I ate no less than 7 sliders as a fourteen year old. I never thought to ask for the recipe even though I always thought about how good it was. Finally, I messaged my aunt's husband to see if he could get Stanley's recipe. He forwarded me a picture of what looked like a magazine excerpt that has been well loved.

Full disclosure: I need to reshoot this recipe. The photo above is a stock photo from Canva. It will be removed once I get a better shot of my own.

The first time I made it, I followed the recipe to a T and it was delicious. The pulled pork recipe was adapted from Ontario Pulled Pork. The original recipe is slightly different than what I make today, and it is made for the slow cooker only. When I bought an Instant Pot, I assumed I could just follow the same recipe and it would be fine. Nope. 100% nope.

The original recipe calls for 14 ingredients - all of which are pantry or household staples with the exception of the pork. They recommend a pork shoulder blade roast, but I've tried many different cuts of pork - both boned and de-boned - and they've all turned out incredibly well.

All of these ingredients are found in my pantry at any given time. They're all budget friendly and not hard to find, even in small towns.

I'm not kidding when I say this recipe is easy. It takes, at most, 15 minutes of active prep time. The method for the slow cooker and the Instant Pot is identical, the only changes are that for the Instant Pot, you can brown the roast directly in the machine, whereas a slow cooker requires you to dirty an additional dish.

The one other change is super slight and this is the part of the recipe that I really struggled with when trying to convert this particular recipe to being Instant Pot Friendly. This slight change is key in any Instant Pot recipe containing tomato paste so listen closely and do. not. skip this.

When making this pulled pork recipe in a slow cooker, you just brown the meat along with some spices and the onion/garlic before adding all ingredients to the pot and stirring before setting it to cook for 8-10 hours on low.

Any avid Instant Pot chef knows the 1 cup rule - that you need at least one cup of liquid in order to ensure you don't get a burn warning. This means that we need, minimum, one more ingredient to make the recipe work seamlessly. I like to add an additional 1 ½ cups of liquid to the original recipe to make sure there's no burn warnings. If you're on a budget, you can use water as it will evaporate by the end of the recipe - but personally I love a can of beer.

With the Instant Pot, you can brown the meat and saute the aromatics in the same pan before adding all the ingredients and stirring to combine. Except leave out the tomato paste from stirring and place it on top of the other ingredients. Do not mix together!

I found both of these things out the hard way. At first, I mixed in all ingredients and left the ratio as is considering the tomato sauce. Before the Instant Pot could even come to pressure, it beeped off and warned me of a burn problem. I started adding beer one can at a time (I believe I finished with 3 and a half) and finally gave up and just made it as a slow cooker recipe with the Instant Pot. With all the liquid, I had to add more spices and boil it off for almost 30 minutes not to mention adding almost ⅓ cup of cornstarch to thicken it. It was 100% a fail.

The solution is to put in more liquid than you think you need and do not stir after adding the tomato paste. I've found 1 can of a tall boy beer (473ml) or 1 ½ regular sized beers (355ml) is the perfect amount. Going with small cans, it also means you get to sip on a half can of beer for the cook time.

Worst comes to worst, you can just boil the sauce off for a bit longer at the end of the recipe if you don't like the consistency of the sauce after the cook time is up and the tomato paste is mixed in.

When I was trying to find the perfect length of time to cook the pork, I did some research and landed on a couple different recommendations.

On the official Instant Pot website, their time estimate for a pork butt is 15 minutes per pound, which would make this recipe be about 52 minutes. Another source I referenced was Simplistically Living's conversion chart, where they recommended 55 minutes for a 3 pound pork shoulder. My other inspiration was looking at recipes for pulled pork designed specifically for the Instant Pot. The recipes varied in time between 40-60 minutes with a 10 minute natural release or full natural release.

The best cook time for this pulled pork recipe, to me, is 55 minutes of high pressure with a 10 minute natural release.

Toppings and Side Dishes

In my opinion, any pulled pork recipe is best suited for a sandwich or slider. The pictures throughout this post show some of the ways I've enjoyed this recipe in the past. I've used pretzel buns (personal favourite), English muffins, white bread and cornbread for the vehicle. White bread is best suited for a grilled cheese, otherwise it will get soggy.

Winning toppings are: pickled red onions, crispy onions, soft fried egg and a cheese - either sharp cheddar or provolone. As shown, it's also amazing on Mac and Cheese. Use my Mac and Cheese recipe but swap the toppings of Fried Chicken and Maple Butter for Pulled Pork! I almost always serve it with coleslaw and although a classic creamy coleslaw goes great with it, I think my favourite variation is the healthy coleslaw recipe from Cookie and Kate (pictured at the bottom far right). 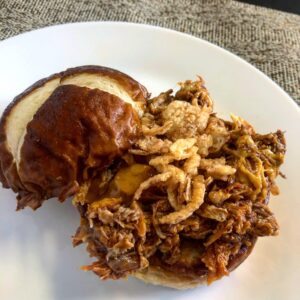