As a proud Canadian, I love incorporating maple into as many dishes as possible. Savory dishes almost always benefit from a hint of sweetness.

When there was a local contest to share unique creations throughout the pandemic to promote community, Sriracha Fried Chicken Mac and Cheese was my entry – one I thought deserved to be shared.

Sriracha Fried Chicken Mac and Cheese is a uniquely surprising recipe that mixes rich, spicy and sweet. The addition of maple butter takes the chicken and waffles idea and turns it into a modern comfort food classic.

I absolutely love all Mac and Cheese recipes, but realize this one takes a fair amount of time. If you want immediate satisfaction, try my 5 Minute Microwave Mac and Cheese.

In order to maximize time, let the chicken marinate while you do the other prep work; grating the cheese, making the spice blend, preparing and measuring out all the ingredients.

I’m a huge believer in mise en place and find it incredibly important to do in order to not get overwhelmed if you’re a new or easily distracted cook.

For the chicken, make sure to not skip the marinade. It makes the chicken retain moisture and really imparts the sriracha flavour into the meat.

The most important thing to get a really good fried chicken is the temperature of the oil.

It’s crucial to heat the oil slightly above the recommended heat because when the chicken pieces are added, the temperature of the oil may lower slightly – resulting in soggy chicken.

It’s best to buy a block of cheese and grate it yourself instead of buying the pre-grated bagged variety. It’s a nice idea to save on time, but it’s more expensive and has additives that can affect the way the cheese melts.

Take the extra few minutes to grate it yourself. If you really want to skip the effort, you can use your food processor with the shred setting – as I often do.

For the recipe, I used both smoked gouda and cheddar, specifically old cheddar. Old cheddar is always a better choice than mild or even medium as it delivers more flavour.

You can use any kind of cheese you want, but focus on two with different profiles. Also, avoid using cheeses like mozzarella that don’t melt well into the roux.

Substitutions would be Asiago, Gruyere, Monterey Jack or any varieties of blue cheese / brie – keep in mind to remove the rinds from these cheese varieties before adding to the sauce.

Maple butter is optional but really rounds out the flavour composition of the dish. Most recipes that have some aspect of sweet, salty, sour and umami have the most rounded taste overall.

It’s really easy to overdo the sweetness with the maple butter, so be light-handed. Although the butter is quite sweet, it’s less sweet than just pouring maple syrup over the chicken.

The flavour combination between sriracha and maple is outstanding on it’s own, the perfect balance of sweet and spicy to compliment the saltiness of the coating.

If you want a spicier piece of meat, just be slightly heavy handed with the sriracha in the marinade, or add in more cayenne.

I served the meal in these mini cast iron pans from Lodge that I purchased on Amazon. They are the perfect size for individual portions. I think that everyone should have a collection of cast iron pans.

America’s Test Kitchen ranked Lodge as their top cast iron choice. Cast iron isn’t mandatory, but it really does create a great texture in foods like Mac and Cheese.

If you can’t or don’t want to use a cast iron, an oven proof baking dish is a good secondary option. It won’t deliver the same crust but is still great.

Do not skip baking the Mac and Cheese as it alters not only the texture but the taste of the crust. 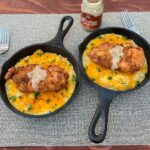 Equipment Used for this Recipe

My name is Lauren and I'm the face behind Maritime Glutton. All my recipes focus on ways to reduce waste, save money and still deliver exceptional taste.

I love pasta, gin and cheese.