Just like every kid, mayonnaise used to be my only acceptable sandwich condiment. Out of all the brands, Subway is king. During a long weekend this summer, I decided to crack the code of the Subway mayonnaise recipe. After a bit of trial and error and lots of research, I have created the closest thing to Subway mayonnaise served outside of Subway restaurants.

This is part of a recipe series recreating Subway at home. All of the other winning recipes can be found here.

I honestly couldn't tell you why (until recently) but the mayonnaise at Subway is different. Most mayonnaise is made out of an acid, salt, egg yolk and oil. This follows the same premise but switches some things up and adds lots of flavour enhancements to replicate the addicting flavour of Subway style mayonnaise.

Through my research, everyone said that S&W mayonnaise is the closest retail option to Subway. S&W lists their whole egg mayo ingredients as:

In order to try and replicate the Subway mayonnaise recipe at home, I started doing research about what people have tried that's turned out close. The recipe I based this off was from AllRecipes. I followed the recipe exactly as it was and the taste of the oil was overpowering. It wasn't a hit and certainly wasn't Subway mayo.

I ended up playing with the ratios, as well as adding some additions to cut through the taste of the oil. I didn't think that would be needed considering canola oil is notoriously plain tasting and neutral.

Everything you need to make your own Subway mayonnaise recipe is as follows:

The only other thing you need is either an immersion blender (my recommendation), a real blender/food processor (more high maintenance, more time, more chance for a failure) or a bowl and a whisk (0% recommended - this will take forever).

The best part about the immersion blender is the speed and ease. This method is nearly fool-proof and takes all of about 35 seconds. I use this immersion blender and love it, and it is conveniently one of the cheapest options at only $54 Canadian. It's a purchase that I didn't think I'd use often but actually get tons of unexpected use from.

The Secret to 2 Minute Mayonnaise

The key to make this work is to add all ingredients to the bottom of your mason jar, topping them all with oil. Once added, you place in the immersion blender at the very bottom. Keep it at the bottom and blend in pulses of 1-3 seconds at a time until an emulsion forms.

Once the bottom emulsifies, slowly (and I mean SLOWLY) raise the immersion blender. While you do that, don't just move the blender upwards, move it in a circular type motion like the blender is walking up a spiral staircase. This mimics slowly adding in oil to a food processor, but is way faster with almost no effort. 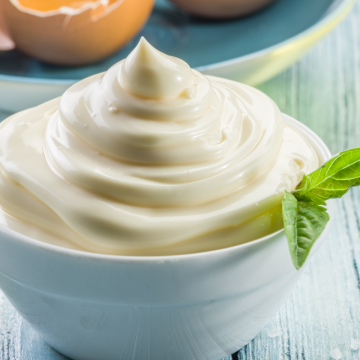